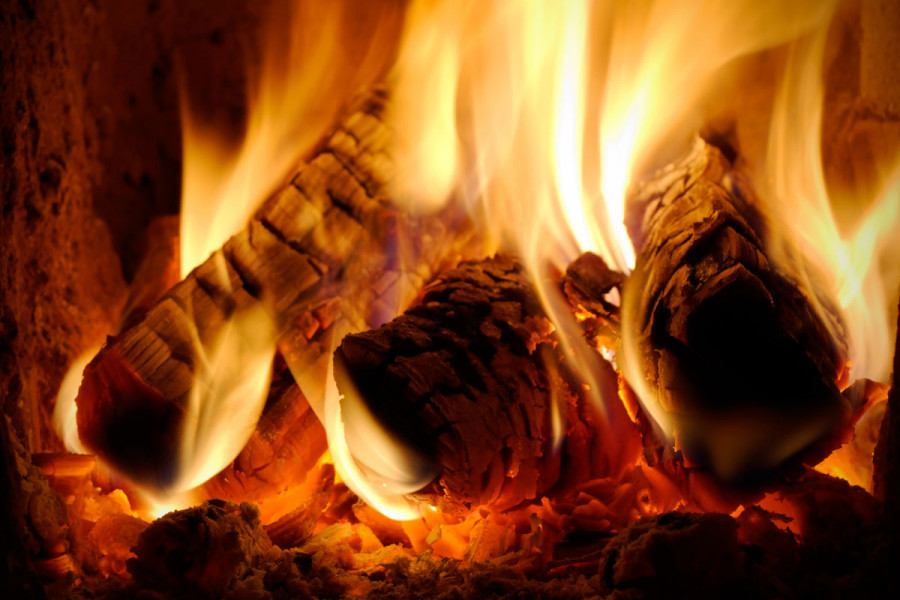 Texto: Cat Weisweiller
Just as the summer season draws to a close and the nights become cooler, we felt that it was a good moment to offer some important information about using your fireplaces and wood stoves safely this winter.

This article was inspired by a long-term Ibiza resident, Marianne Berglund, who very kindly brought to our attention her precautionary tale of a bout of chronic illness caused simply by storing and burning mouldy/fungal wood. Marianne – by all accounts an energetic and dynamic individual – was very quickly reduced to near on total physical and mental inertia in a matter of 4 weeks: “I suddenly had no energy, felt nauseous, and was waking up in the middle of the night unable to breathe. As time went on, it started to take an emotional/mental toll – leaving me having what felt like anxiety attacks, depressed and with ever decreasing brain function – my speech was slurred and I found myself unable to apply myself to even the simplest of tasks. It was very frightening; as if my brain and body were simply shutting down.”

Fortunately, after time, Marianne observed that her symptoms improved dramatically when she was away from her home and, more notably, when she didn’t light her wood stove. After 2 days of not doing so, she decided to instead light her open fire to welcome a guest. Her visiting friend immediately complained of shortness of breath, and Marianne went into a deeper decline than ever before. A concerned friend’s call to Dr Marja van Engelen the next day elicited a quick response: “This sounds like poisoning from a fungus on firewood.” Marja advised that Marianne leave her house immediately for at least 10 days, and that all wood should be removed carefully, wearing gloves. Tests that followed confirmed her suspicions. After 3 weeks of natural remedies prescribed by Marja, Marianne thankfully made a full recovery; her only residual concern being that no one else should go through the same experience. Marja is quick to point out that, “Burning certain fungi is one thing, but having contaminated firewood lying around the home carries an even greater risk.” Here are some tips that will ensure a safer winter ahead:

* To avoid any doubt – as some dangerous spores are invisible to the eye – never store wood of any description inside your home.

* Wherever possible, burn woods indigenous to Ibiza: pine (good for starting fires), almond, carob (produces high heat) and olive (burns slowly) – but avoid the roots. Sabina is a good wood for burning, but as it is a protected wood in Ibiza, it is prohibited to cut it from any healthy standing tree.

* If it is taking too long to get a fire started, the chances are that it is either too wet or too green – which challenges both your and your chimney’s health. Ideal wood for burning has already spent 1-2 years off the tree.

Bas Segers, a chimney sweep, fire safety specialist and registered stove, chimney and traditional stone fireplace installer reports that some people complain of headaches and fatigue when he visits – this could be caused by burning the wrong woods, lack of ventilation or blocked chimneys: “I’m often surprised that people have a healthy fear of fire outside of their homes, but inside their own homes they don’t attach the same importance to fire safety.” Bas, who himself does free inspections, offered some vital pre-emptive advice:

* Chimney fires, which create a heat pressure that can burst a fireplace – resulting in catastrophic house fires – are caused by a build-up of soot and tar, which later compress, harden, and become highly flammable. For this reason it is imperative to have your chimney swept annually, or at the very least
every 2 years.

* Dry, untreated woods cause less build-up of soot in your chimney. Wet, treated or green wood and cones (which are oily) block your chimney faster.

* If your fire gets out of control, do not use water to dowse it – as the water vapours only serve to intensify the heat. Instead, always have a bucket of sand nearby to suffocate the fire.

* Over the summer months, place netting or a sack around your chimney outlet to avoid a build-up of dirt, or wildlife nesting, getting trapped and even dying inside.

* For winter, stock up on wood that has been drying throughout the summer – it is both superior and lighter – therefore cheaper to buy by weight.